by AndrewEncore · April 19, 2011 · Lamb Casting · 1 Comment
Andrew here: I’ll admit, when CS suggested the idea of recasting Magnolia I was intrigued for the very same reason it seems like a strange idea. It’s a recent flick, the cast is huge and Anderson’s films always seem so meticulously casted. So, I was interested in seeing what you’d come up with. Even those of you who didn’t participate had some great ideas, and by great I mean hilarious (like Jose’s suggestion of recasting every role with Julianne Moore – including the frog). I received four well casted entries, and I set you to voting.
The were:
Rich of Wide Screen World 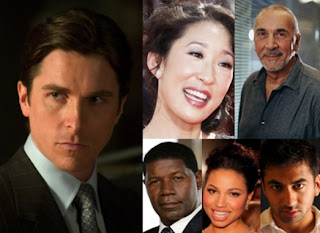 Susan Sarandon (Narrator); Christian Bale (Frank T. J. Mackey); Dennis Haysbert (Jimmy Gator); Jurnee Smollett (Claudia Wilson Gator); Frank Langella (Earl Partridge); Sandra Oh (Linda Partridge); Frankie McLaren (Stanley Spector); Kal Penn (Phil Parma); Steve Carell (Donnie Smith)
I have to be honest and admit that I’m sucker for Susan Sarandon, so the fact that Robert not only had a female narrator but the truly awesome Susan made me pay immediate attention to what he had to say. What is it with Bale seeming like the obvious successor to Tom Cruise? It’s probably that intensity they both have, and though it’s an ensemble piece Mackey does seem to emerge as more significant than most of the counterparts. I, like a number of you, was most interested in seeing what our casters would do with the married couple and I love the idea of Sandra Oh taking on Linda Partridge’s role. Oh is such a fine actor in search of a good role, and I could definitely see her pulling this off – opposite Frank Langella , no less. Rounding out the ensemble I especially like the mentions of Steve Carell and Kal Penn.
Highlight: Sandra Oh
Robert of His Eyes Were Watching Movies 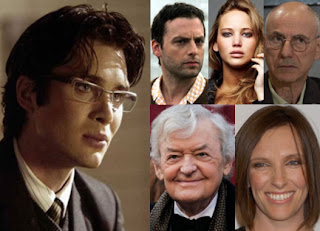 Mark Ruffalo (Narrator); Cillian Murphy (Frank T. J. Mackey); Alan Arkin (Jimmy Gator) ; Jennifer Lawrence (Claudia Wilson Gator); Hal Holbrook (Earl Partridge); Toni Collette (Linda Partridge); Max Records (Stanley Spector); Justin Kirk (Phil Parma); John Hawkes (Donnie Smith)
The choice of Cillian Murphy sort of leaped out at me. I’m always going back and forth on what I think of him. The guy has talent, that much is obvious – but where is that defining role all young actors are in search of? I would question his youth, but it’s the sort of interesting choice I could get behind. I sort of expected Arkin to show up for Patridge, but I could see him working as Gator and of course Toni Collette as a fill-in for Julianne Moore is a fine idea, although I’m oddly more intrigued by the idea of Holbrook as her husband. And, how nice is the reunion – sort of – of Hawkes and Lawrence?
Highlight: Cillian Murphy
Defending champion CS of Big Thoughts from a Small Mind 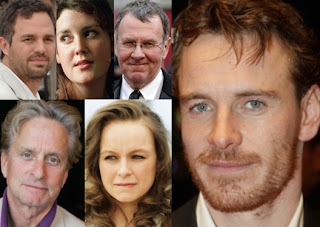 Vin Diesel (Narrator); Michael Fassbender (Frank T. J. Mackey); Tom Wilkinson (Jimmy Gator) ; Melanie Lynskey (Claudia Wilson Gator); Michael Douglas (Earl Partridge); Samantha Morton (Linda Partridge); Max Records (Stanley Spector); Mark Ruffalo (Phil Parma); Michael Stuhlbarg (Donnie Smith)
Vin Diesel as the narrator seems like one of those ideas that could be brilliantly or absolutely terrible. I’m not sure which, because the guy does have one of those “voices” that would work in narration. Isn’t it weird how Fassbender has blown up in the last 18 months as a go-to guy? I’m still not certain of it, but using his work in Fish Tank is the best judge I’d say he could work here. Sidelining players like Wilkinson, Lynskey and Ruffalo are all great but how the idea of Samantha Morton is truly inspired. Morton is one of the finest actors of her generation. She’s not quite chameleonic, but her range is expansive.
Highlight: Samantha Morton
Hal of Forget the Popcorn 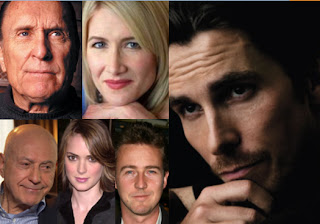 Alec Baldwin (Narrator); Christian Bale (Frank T. J. Mackey); Alan Arkin (Jimmy Gator) ; Winona Ryder (Claudia Wilson Gator); Robert Duvall (Earl Partridge); Laura Dern (Linda Partridge); Chandler Canterbury (Stanley Spector); Edward Norton (Phil Parma); Robin Williams (Donnie Smith)
Another nod for Arkin as Gator, and some interesting sideline players turning (hello Winona and Robin). What’s more, we get another citation for Christian Bale – which, as I said before, is a sound one. Laura Dern seems like an inspired choice. It’s not quite obvious, but it seems logical and Duvall as Partridge is along the same vein.
Highlight: Robert Duvall
My kneejerk reactions had Ben Foster at the top of the list, too young – perhaps – but I keep casting him in my mind in almost every male role for actors 30-40. That guy needs a breakout role, he’s been doing such good work. For some reason, I kept expecting Naomi Watts to turn up in the discussion for Linda – but the choices submitted were all great and the results showed that you were floored by the combo of Cillian, Toni and Hal. Robert of His Eyes Were Watching Movies wins.
What did you think of the individual choices? Did your favourite win?