Andrew here. Hold back your angry diatribes, this past month has just been horrendously busy hence the extreme lateness in the results for LAMB Casting. But, fear no more, the results are here. Before we go there, let’s just take a look at the four options that came in for recasting the Oscar winning 1967 piece which is a significant part of cinematic history for Stanley Kramer, Katharine Hepburn, Sidney Poitier and Spencer Tracy. 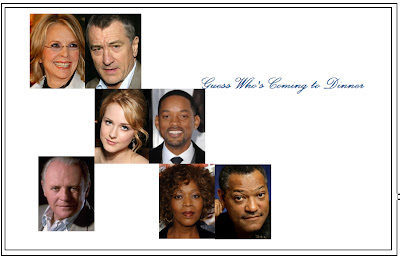 A Few Observations: I love Katharine Hepburn more, exponentially, but Keaton’s prowess as a comedienne often reminds me of the late Great Kate. It’s a talent exuded best in her early work and Something’s Gotta Give most recently where she has the ability to act well while seeming to be mimicking herself and it’s that sort of sweetness which I think would make her perfect for Cristina. It’s nice that Shane teams her up with her Marvin’s Room costar and even though I think that DeNiro seems slightly too abrasive for Matt I like the cast pairing. And as great as that pairing is it’s trumped by the complete awesomeness of Alfre Woodard and Laurence Fishburne. Not only does that seem to be a match made in heaven, but Alfre Woodard should star in everything.

Chip Lary of Tips from Chip 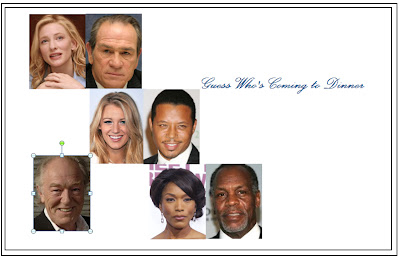 A Few Observations: I’m actually surprised that despite both Fishburne and Bassett turning up as potential candidates for Mr. and Mrs. Prentice no one paired them up together. Who doesn’t want an Ike and Tina reunion? Chip mentioned that he was toying with the idea of Steve Martin as Matt Drayton. I like Martin fine, but I don’t think I’m ready for him to step into another awesome Spencer Tracy role. Although, how odd is it that Steve was almost chosen when his costar in Father of the Bride (Diane Keaton) was chosen for the lead role above? Am I confusing? Moving on… There’s something brilliantly on the nose about Blake Lively as Joana. I think most fans of Guess Who’s Coming to Dinner would agree that Katharine Houghton is a little annoying, and lord knows Blake can fulfil that. 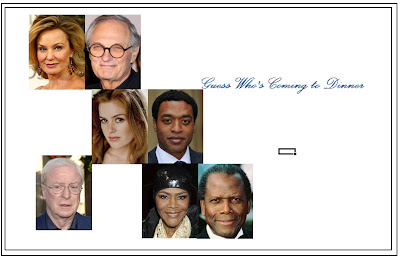 A Few Observations: You have to give it to Candice for the nostalgic factor of having Sidney Poitier back as Mr. Prentice and the lovely Cicely Tyson as his wife and I love that they’re opposite such a consummate pairing as Jessica Lange and Alan Alda. Both are actors who immediate radiate the sort of intelligence you’d expect from a couple as great as the Draytons. Ejifor is one of those actors who doesn’t seem as noted by his peers (black or otherwise) and I like the idea of him in a key role like this.

Anna of Defiant Success pointed out 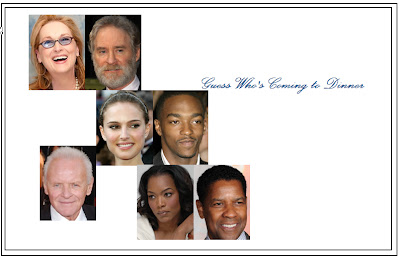 Observations: Where has Kevin Kline been? The man is such a talented actor (read: he deservedly won an Oscar for his work in A Fish Called Wanda) so as hypothetical as it may be I am quite pleased that Anna chooses him to help her remake cast. Considering how much people keep fêting Meryl Streep as the world’s greatest actress and considering how I keep fêting Kate as the world’s best actress it isn’t that much of a surprise having her take over a Kate role. Can she handle it? This gregarious mama-bear role is actually one I’d buy Meryl in easily. And, Angela and Anthony show up again which is nice because it doesn’t strike me as repetitive as much as it suggests that they’re both fine actors in need of a great roles.

So, the results. It wasn’t quite a runaway but there ended up being a three-way tie for second making the winner something of a runaway in technical terms. And, that winner is Candice of Reel Talker. I guess you guys couldn’t resist the power of Poitier. I can’t say I blame you.

What do you think of Candice’s new and improved cast?

Tags: Guess Who's Coming to Dinner