LAMB Casting: On the Waterfront

Andrew here, with a new episode of LAMB Casting. In an attempt at efficiency I’m starting a new leg of the LAMB Casting fun only a few days after crowning Anna (Defiant Success) as winner, second time over. We’re going further back with Elia Kazan’s excellent On the Waterfront.

Random trivia, did you know that Kazan’s reputation was somewhat smeared for naming names (naming fellow members of the American Communist Party during the thirties, a big no-no during the war). It irrevocably destroyed his friendship with playwright Arthur Miller (Death of a Salesman). Stemming from their destroyed relationship Miller wrote the very excellent A View from the Bridge, a tale about someone who snitches on his family and meets a tragic end. On the Waterfront was stemmed from the incident, too, and concerns the heroism of being a “snitch”, and the film and the play came out a mere year apart. Chew on that. Art isn’t easy, folks.

Now for the casting rules, after the jump...


Interiors was predominantly female and we have the converse this time around with something predominantly male. Here’s who you’re casting: 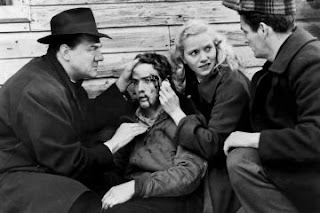 More trivia, all five of these performances were Oscar nominated (with Saint and Brando winning, the former for a film debut), so you’ve got some big shoes to fill. Go wild, get creative, be original. Who would you cast. I presume most of you have seen On the Waterfront, but if you’ve not and you’re interested in participating I’ll include brief character descriptions like I did for the last leg of the race.

Happy casting all. Don’t sit on your great ideas like Terry and lament that “I coulda been a contendah”; get your choices into me at dangerous.liaison231(@)yahoo.com (remove parentheses) with the title WATERFRONT LAMB CASTING (and remember when you send your choices in not to post them on the blog just yet to keep in accord with our secret voting).

(And, my age directives are just suggestions, sometimes characters read younger than the performers playing them, case in point – Edie, or older – case in point, Charley.)

Tags: On the Waterfront