LAMB Casting: All About Eve (RESULTS)

Andrew here with the results for the latest round of LAMB Casting. I actually got on email from one of the participants in this month’s competition, so I suppose my lateness speaks for itself. On to the casts…

All About Eve is a fine encapsulation of classic cinema, and all six LAMB Casters did some interesting things with the recasting.

Shane of Film Actually gave us this cast: 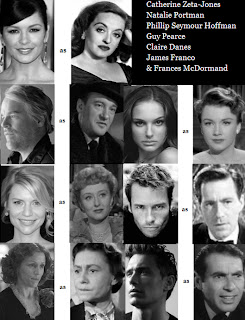 Doesn’t Guy Pearce look like a fairly authentic double for Hugh Marlowe in that shot? This is a young cast. Frances as the caustic Birdie is the only actor in her fifties, and that’s one of those casting decisions you could see making sense. McDormand is not a character in the vein of Thelma Ritter, but this is the type of role I could see her relishing. If there was to be a Catherine/Natalie showdown I think it’d be skewed in Catherine’s favour. I’m trying to think of Natalie pulling Anne Baxter’s glamour, but I’m coming up short. The choice of Franco as Bill, though, I can already see.
Credentials : 4 Oscar winners, 1 Oscar nominee
MVP: Philip Seymour Hoffman as Addison DeWitt (just imaging him hamming it up) 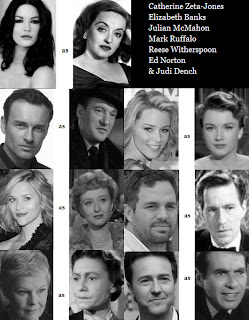 And, another Zeta-Jones. I’m actually a bit surprised at the choice. I like Catherine, but recently it seems as if she’s fallen out of the estimation. But, I’d wager she’d make for a convincing officious actress based on her Oscar winning work in Chicago and her Tony winning work in A Little Night Music (playing performers in both). And, just imagine the marvellous Judi Dench as her maid/confidante – that could be a match made in sarcastic heaven. I often think of Elizabeth Banks as a more talented version of Rachel McAdams, I can’t say why she doesn’t get more notices – so I like her inclusion here and McMahon as DeWitt could be brilliant.
Credentials: 3 Oscar winners, 2 Oscar nominees
MVP: Judi Dench as Birdie 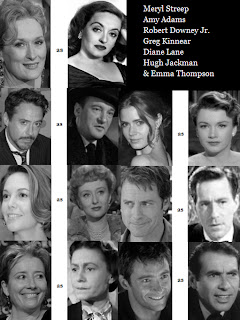 Ah, Streep. I suppose as far as iconic actors go Streep is more than equal to Davis. Still, I’m not completely sold on her playing Margo if only because I don’t get that lascivious sex appeal from her (even when she was younger). Still, I suppose when in doubt (no pun intended) Streep is hardly a poor choice, and just look at the cast around her. For me, All About Eve is all about the female cast but Wendy’s choices for the men are excellent, especially Greg Kinnear as Lloyd which just seems impeccable. Emma Thompson playing could be one of those unexpected bits of brilliance, don’t you think?
Credentials: 2 Oscar winners, 4 Oscar nominees
MVP: Amy Adams as Eve Harrington

Walter of The Silver Screening Room decided on: 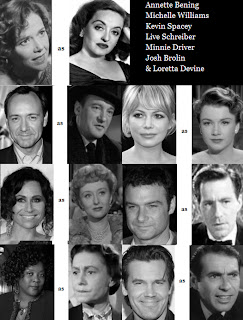 I hate to get all nepotistic, but the presence of Annette Bening had me sold. I have to admit, that when I thought of a reimagining of the cast she seemed to be the perfect fit. Although, that could just be residual appreciation for her work in Being Julia. But, who doesn’t love an American Beauty reunion? Wouldn’t Kevin Spacey be fun as Addison? And, Michelle Williams has that sereneness that I always think she’d make for an interesting villain. Even isn’t exactly a villain, but I could see Michelle pulling off the subtleties essential for the character.
Credentials: 1 Oscar winner, 4 Oscar nominees
MVP: Annette Bening as Margo Channing

This Guy Over Here suggested: 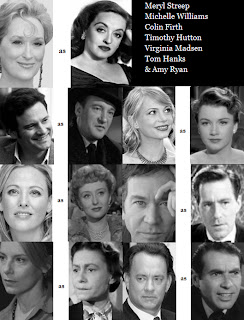 Ahoy, Streep! And, Michelle Williams. I love when the choices intersect like this; it shows where everyone’s thoughts are. It’s interesting how This Guy goes for older actors for Bill and Lloyd. I’m not as sold on the inclusion of Hanks (yes, I admit, I’m a hater) but I find Timothy Hutton a whole lot more interesting. I have massive love for Celeste Holm in the original film, and I though I’m not big on Virginia Madsen I feel that she’d actually capture that nature of Karen which is essential for some of the key plotpoints in the film. It’d be interesting having Birdie younger than Margo, but Amy Ryan makes everything she’s in better.
Credentials: 4 Oscar winners, 3 Oscar nominees
MVP: Colin Firth as Addison DeWitt

CS of Big Thoughts from a Small Mind gave us: 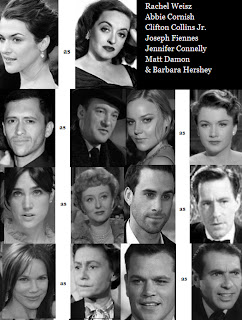 This is another young cast, and I have to say the prospect of a Rachel Weisz/Abbie Cornish showdown does interest me. Sure one has an Oscar, but I find them both to be terribly underrated and I like the idea of Rachel playing someone a little more visceral than usual. Fiennes and Connelly seem like just the sort of couple that Margo would be friends with. Barbara Hershey has the nurse makes me smile because I’m still thinking about her work in Black Swan.
Credentials: 3 Oscar winners, 1 Oscar nominee
MVP: Abbie Cornish as Eve Harrington

You casted your votes and the eventual winner was a Streep one – WendyMoon of Movie Viewing Girl edged out the competitors for the win which I found interesting because Wendy actually sent me some bonus paraphernalia. She casted Claudia Caswell, just for fun with Scarlett Johansson in the role – can anyone imagine ScarJo fulfilling the requisite sexiness of Marilyn? I can. More importantly, though, she made her own poster.

Who could resist this sort of dedication?

Congrats to Wendy. What do you think of the results?

3 Responses to LAMB Casting: All About Eve (RESULTS)