Interview with a LAMBpire: Candice of Reel Talk

Andrew here to give you some insight into another one of our LAMB members. This time I’m sitting down (in spirit, of course) with Candice of Reel Talk who won the last LAMB Casting episode for recasting Guess Who’s Coming to Dinner.

Andrew: The lovely Jessica Lange is one of the persons in your recast version of Guess Who’s Coming to Dinner. When she won the Emmy two years ago for her work in Grey Gardens she remarked how difficult it was for women her age too get plumb roles. What made you think of her, here?

Candice: When I was re-casting Christina, I thought of Katharine Hepburn. So, I began to think of an older woman with tons of class, but someone who is able to stand in a room full of men and not feel the slightest bit of intimidation. Hepburn never really wore flowy dresses in the movie, but was still all woman. She was tough, but diplomatic at the same time. She held her own, but understood her husband’s stance as well. I think Lange embodies those characteristics. She also 1) resembles Hepburn, slightly (mostly in her demeanor). I think Lange is the type of actress that doesn’t talk about taking a stance or leading a movement, she just does quietly. I though the actress who would step into the role of Christina.

A/N: I never thought of the Kate/Jessica connection, but Candice seems so on point and though I’m not quite sure they look that similar, they do have the same cadence. (There sure is a little of Elinor of Aquitaine in Constance on American Horror Story.)

A: Do you agree with the auteur theory (which posits that the director is the biggest creative force behind a film)?

A: Which directors best embody this theory for you?

A: Do you see films predominantly as art or entertainment?

A: Oscar season abounds, and people continue to bemoan the fact that the AMPAS wants to get more ratings &etc. Do you think the AMPAS should deliberately try to win younger, “hipper” audiences by pandering, or should they just stick with the steadfast folks who’ll watch it year in, year out. I.E. Is the Academy Awards more significant as a “show” or as an event for cinephiles in particular.

C: I think the AMPAS should award talent, regardless of age, race, or gender. The Academy Awards shouldn’t just be seen as a television event pandering for ratings, but an event rewarding talent to whom it’s due (that just happens to air on TV as well). I understand they want to build an audience, but their first concern should be awarding real talent.

A: Online film criticism and blogging seems to be a predominantly male “career”. Why do you think that is?

C: I think it’s especially tough for a female critic to offer opinion or analysis in film. They take a lot of critical judgment by their male counterparts, who too often equate their difference of opinion to naivete or misguided bias. Not every woman can take that kind of criticism day in and day out, so they don’t try to break into it. Also, I think female critics may be less inclined to break into a male dominated industry of film criticism, to discuss the even more male dominated Hollywood industry. Their opinions are too often times unvalidated or ignored.

A: What’s one film you’d like to take credit for? Not necessarily your favourite, but one which you’d like to have your name attached to as writer, director, producer or all of the above.

C: Oh boy…I honestly don’t know. But, if I had to choose just one, I think I’d say Closer. If you ask me tomorrow, I’m sure it would be another movie. 🙂 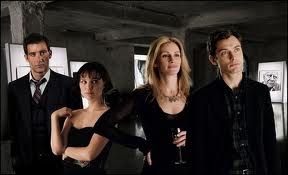 I’m immediately intrigued by Candice’s choice of Closer, so a forgotten gem with fine work from all the principals. What do you think of her thoughts on the auteur? The Oscars? Women and film criticism.

3 Responses to Interview with a LAMBpire: Candice of Reel Talk